Respect the Women Who Ride

By adminAugust 4, 2017Main
No Comments

What do you think of when you see women who ride?  Are you proud of them for riding their own motorcycle?  We think it’s cool even to be a passenger.  But that has not always been the case.

The concept of the motorcycle, which can be traced back to 1867, started out to be a male dominated sport.  Motorcycle culture grew after WWII, when the soldiers returned home and needed the independent feeling that riding gave.  With the motorcycle, the rider felt a brotherhood to other riders, similar to that within the military.  So the culture grew and continues to grow.

It is worth mentioning an event that took place back in July of 1947 called the Hollister Riot. This set a tone that labeled many who rode back then as drunken outlaws.  It started as an AMA event for sanctioned racing events and social activities.  What it turned into was over 4000 motorcycle riders flooding the small town of Hollister, California, almost doubling the size of the town.  Soon motorcyclists were riding their bikes after consuming alcohol through the streets of the town.  There were fights, causing damage to bars and bikers throwing beer bottles through the town’s windows.  Bikers could be seen sleeping on sidewalks, lawns, and disturbing the peace. With the news coverage that followed this event, the nation began to consider motorcycle riders as hoodlums.  These motorcyclists began to be referred to as the 1 percenter’s, because they gave 99% of the decent riders a bad reputation.

With that “biker” mentality, unfortunately came the babe on the back of the bike.  The treatment of women went into the sewer, as they were referred to as sex objects and displayed as a trophy for the biker. 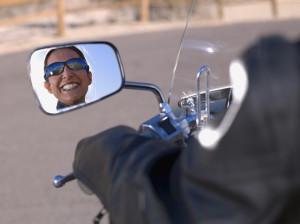 At times we still run into a biker magazine that uses the exploitation of women to sell magazines.  We at Crampbuster will not advertise in a magazine that shows women as sex objects.  Our business is co- owned by a woman who is not willing to support the degrading of other women.

There are many organizations and people we admire that diligently bring the attention to this mindset.  Recently we had the pleasure of meeting Lauren Tranthan who rode her motorcycle over 10K to help the cause of ending sex trafficking. Here is a link to her website: ridemyroad.org.

Today we have riders both men and woman who love the ride and adventure of the open road.  You can see BMW’s, Honda, Ducati’s to name a few as well as Harley’s on the road.  These riders come from all over the world to travel the roads with a smile on their faces.  They and their motorcycles are dressed for the ride, with every accessory imaginable.

It is encouraging to see the dignity brought back to riders and especially the woman rider.  Be assured we are proud of the many men and women out there who ride and love motorcycles like we do.