A Motorcycle Tour Along The Oregon Coast

By adminJune 15, 2016News / Announcements
No Comments 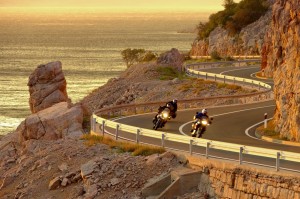 First of all, no matter what time of the year you wish to tour the Oregon coast, bring some warmer clothes with you. Oregon coasts aren’t those where you melt from hotness, it’s rather an area of high humidity. Foggy clouds usually rise over the sea, bringing rainy days occasionally. Ponds, lakes and rivers contribute to the moisture, as well, and spew dew on tiny grass leaves. However, the chilly breeze and foggy weather is what gives Oregon this unique taste. And the good thing is that you won’t be sweating in your leather jacket. The Oregon coastline is around 400 miles long, so plan to spend at least 3-4 days travelling. Put the Crampbuster cruise assist on your motorcycle to prevent “death grip” and make the long rides less exhausting.

Millions of tourists flock every year to the summer beauties of California  to live the Californian dream and gaze into its rich and beautiful coasts. But that does not mean that you should overlook the breathtaking beauties of its neighbor state Oregon. The fact that Oregon isn’t as popular as its neighbor state might even be an advantage for motorcyclists. Oregon is certainly less crowded and generally, it might be more comfortable to travel on Oregon’s roads. There is a lot to see on a motorcycle trip to Oregon. Just simply search for “Oregon Coast” on Google and you will understand what I am talking about – serene rocky or sandy beaches, most of them untouched by mankind, rich flora, crystal clear ocean water, lone and steep cliffs and soothing sunsets which make a fellow motorcyclist reconsider the meaning of life. Here are a few tips and hints for exploring the Oregon coast.

Those who want a taste of wilderness should visit the four state parks of the southern Oregon: Cape Blanco, Cape Sebastian, Honeyman and Umpqua Lighthouse. All of these promise unforgettable scenery.

Another attraction is Astoria, a town known for its eateries and a nostalgic feeling, uniting the new and old-fashioned.

Believe it or not, besides all the peaceful areas of Oregon, those who want an adventurous ride won’t be disappointed either. The Oregon Coast is known for its vast sand dunes, which can give you the best off-road motocross experience.

Road trippers, grab your backpack and embrace Oregon! The coast is waiting for you!